“Finance charge” is a creation of the Truth-in-Lending Act and has existed since it first saw the light of a reading lamp back in 1968:

“Except as otherwise provided in this section, the amount of the finance charge in connection with any consumer credit transaction shall be determined as the sum of all charges, payable directly or indirectly by the person to whom the credit is extended, and imposed directly or indirectly by the creditor as an incident to the extension of credit . . .” (82 Stat. 146 [1968], § 106[a])

Currently, this provision states the same thing, albeit it does provide for a few specific exemptions:

“. . . The finance charge does not include charges of a type payable in a comparable cash transaction. The finance charge shall not include fees and amounts imposed by third party closing agents (including settlement agents, attorneys, and escrow and title companies) if the creditor does not require the imposition of the charges or the services provided and does not retain the charges. . . .” (15 U.S.C.A. § 1605[a])

The definition of “finance charge” under both the Federal Reserve Board’s and the Consumer Financial Protection Bureau’s versions of Federal Regulation Z (12 C.F.R. Pts. 226 and 1026, respectively) contain an example list of charges which qualify as “finance charges.” However, whether a fee is or is not a finance charge depends on the fundamental criteria of the definition and not on whether it appears in such list. As outlined by the U.S. District Court for the Southern District of California, to qualify as a finance charge, a charge must be:

The CFPB’s Supervision and Examination Manual (available at: https://www.consumerfinance.gov/compliance/supervision-examinations/) provides a useful “Finance Charge Chart” for navigating both this criteria and the exemptions provided for in Regulation Z. It is reproduced below: 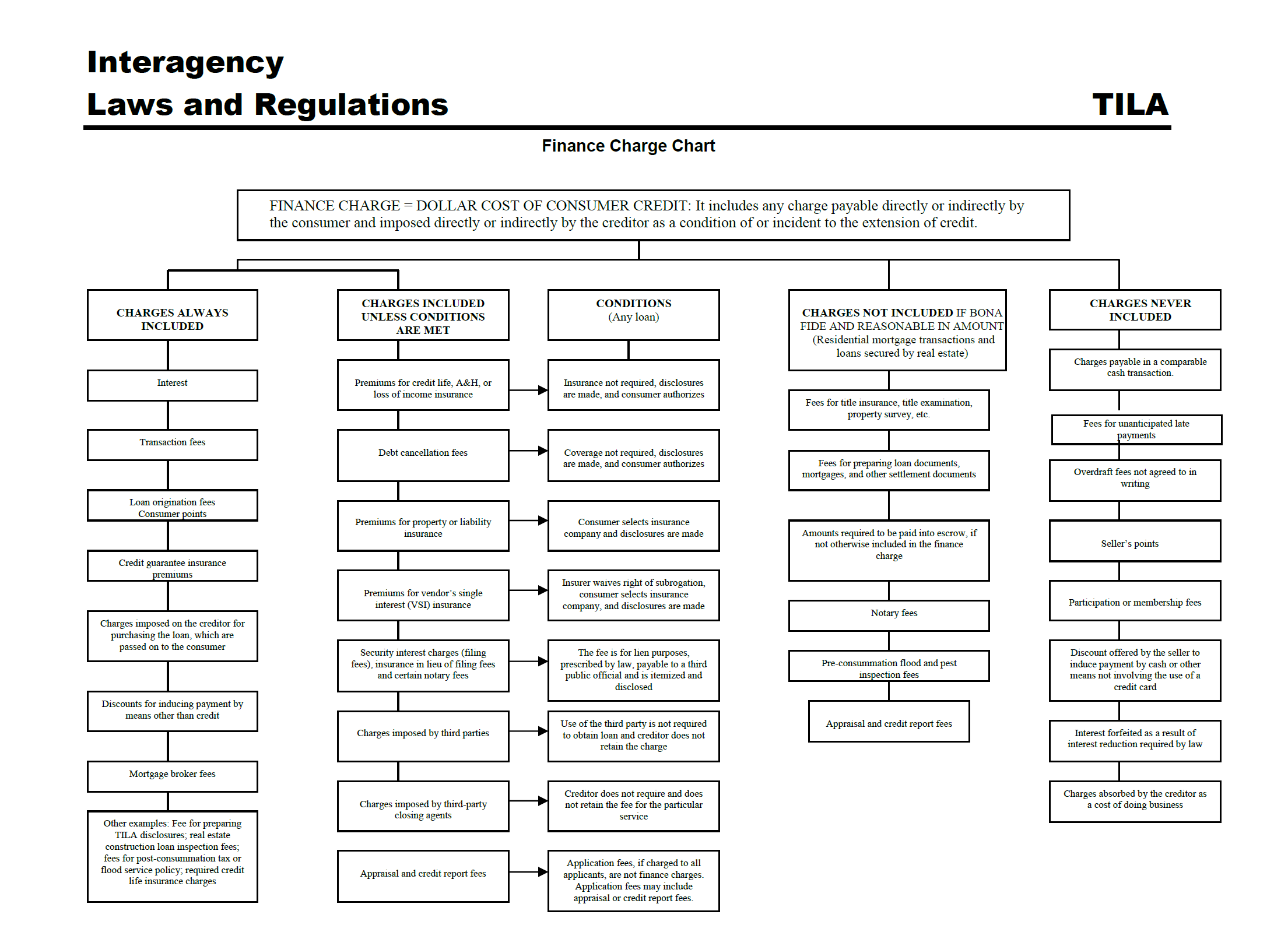 A key term in defining a finance charge is “payable”. This does not mean the same as a fee “paid by” the borrower. The best explanation of this “term” was provided by the CFPB in 2016 in their analysis to the proposed rule which later became known as “TRID 2.0”:

A good (albeit antiquated) example of a charge indirectly “payable” by the consumer is a yield spread premium (YSP), which can be defined as:

While the consumer would not pay this YSP directly and it would be paid by the creditor, it is still considered a finance charge because the consumer is paying a higher interest rate as a result. This not only makes the payment indirect (essentially, the costs of the premium are passed to the borrower via an increased rate), but makes the YSP “payable” by the consumer (the consumer does not pay the YSP at closing, but is legally obligated to pay the higher interest rate as a result of the YSP). As explained by the U.S. District Court for the Eastern District of Michigan:

A frequent question posed is whether charges paid by either the seller, the lender, or another party should be considered a finance charge or not. This question arises over the criteria that a charge is a finance charge if it is “payable” (loosely defined) by the consumer either directly or “indirectly.” Does the consumer pay for the fee through another channel (like with a YSP)? If the other party fails to pay the charge, is the consumer legally obligated to pay it?

Everything depends on whether the charge meets the criteria of a finance charge but, at least in the case of seller-paid charges, both the FRB and CFPB provide some specific guidance.

Generally, seller-paid charges (particularly points) are excluded from being considered a finance charge. Historically, this was not always the case. Starting in 1970, the FRB added the following Commentary to Regulation Z:

“(a) Section 226.4(a) (Regulation Z) includes in the finance charge any charge ‘payable directly or indirectly by the customer, and imposed directly or indirectly by the creditor as an incident to or as a condition of the extension of credit ***. The question arises as to the proper treatment of discounts paid by the seller, including points imposed on the seller by the lender in connection with a real estate transaction.

(b) Under the general rule in § 226.4(a), any such discount, to the extent it is passed on to the buyer through an increase in the selling price, must be included in the finance charge. However, as a practical matter, it may be difficult to determine whether or not a discount paid by the seller in connection with a real estate transaction has been, in fact, passed along to the customer as a part of the purchase price of the property. The same situation may exist in other cases, for example, those in which the creditor sells at a discount obligations payable in more than four installments.

(c) The Board has concluded that in any such transaction coming within its administrative enforcement authority, where seller’s points or discounts were, in fact, passed along to the customer or buyer and the amount thereof was not disclosed as a finance charge, the Board will take such action as may be appropriate in the circumstances. However, it will not attempt to prescribe rules creating a presumption that all discounts or points are passed on to the customer or buyer and hence must be included in the finance charge in any particular class of transaction. On the other hand, the inclusion of seller’s points or discounts in the finance charge will be acceptable to the Board as a correct disclosure under Regulation Z.

(d) This position relates only to the Board’s administrative enforcement procedures and it is not intended in any way to restrict or prejudice the rights of any customer or buyer to bring an action under sections 130 and 131 of the Act where he has reason to believe he is or was required to pay directly or indirectly a finance charge imposed directly or indirectly by the creditor of the transaction and the amount of that finance charge was not disclosed to him.” (12 C.F.R. § 226.406 [1970], as published in 35 FR 17029 [1970])

The FRB abandoned this position when revising both Regulation Z and its Official Staff Commentary, due to the “Truth in Lending Simplification and Reform Act” (94 Stat. 132 [1980], Title VI). The FRB explained their addition of a specific exclusion for seller points under 12 C.F.R. § 1026.4(c)(5), as follows:

The Official Staff Commentary to Regulation Z was revised in a separate notice (see 46 FR 50288 [1981]) and it included the first comment to paragraph 4(c)(5), which still (substantively) exists today:

“1. Seller’s points. The seller’s points mentioned in § 1026.4(c)(5) include any charges imposed by the creditor upon the noncreditor seller of property for providing credit to the buyer or for providing credit on certain terms. These charges are excluded from the finance charge even if they are passed on to the buyer, for example, in the form of a higher sales price. Seller’s points are frequently involved in real estate transactions guaranteed or insured by governmental agencies. A commitment fee paid by a noncreditor seller (such as a real estate developer) to the creditor should be treated as seller’s points. Buyer’s points (that is, points charged to the buyer by the creditor), however, are finance charges.” (12 C.F.R. Pt. 1026, Supp. I, Paragraph 4[c][5]; formatting in the original; see also Ibid. Pt. 226, Supp. I, Paragraph 4[c][5])

In 1982, the FRB began second-guessing this change:

“Since the amendment of the regulation, an increasing number of financing arrangements have been developed that offer the consumer below-market financing. These arrangements have been developed to offer the buyer lower monthly payments or to qualify the buyer at a lower interest rate. A number of interested parties have questioned whether the seller’s points rule applies to specific financing arrangements. Some have expressed concern that creditors have an opportunity to significantly understate the APR.” (47 FR 32433 [1982])

The FRB proposed five alternatives for the treatment of seller’s points, including the reversal of their changes in 1981 and classifying seller’s points as finance charges. However, this proposed rule was withdrawn later in 1982, since the majority of comments opposed additional changes, due to: (1) how soon these new changes would take effect after Regulation Z had already been completely overhauled; (2) problems with a couple of the alternatives proposed which would have made it difficult to determine which seller’s points were passed on to the borrower; and (3) the fairness of imposing additional burdens on creditors for a practice or problem which is outside of their control (it is in the seller’s control; see 47 FR 44741 [1982]).

The second comment to Paragraph 4(c)(5) was added in 1984, as a part of a series of amendments to the Official Staff Commentary. The reason for the addition is explained by the FRB in their proposed rule:

“Comment 4(c)(5)-2 would be added to explain the correct treatment of mortgage insurance premiums (and other charges that are normally paid by the borrower) when they are paid at or before settlement in a lump sum by the noncreditor seller. This is most likely to arise in the case of FHA mortgage insurance premiums, which the Department of Housing and Urban Development now collects in a lump sum rather than periodically. If the seller makes the payment, the creditor should treat the amount of the payment as seller’s points and exclude it from the finance charge. A creditor who gives disclosures before the payment has been made should rely on the estimate provision of § 226.17(c)(2) to determine the correct disclosures.” (48 FR 54642 [1983])

In the final rule, the FRB revised the proposed Comment “to eliminate some of the restrictions on the payments to which it applies and to explain the use of estimates when disclosures must be made before the creditor knows who will pay the fee.” (49 FR 13482 [1984]) The final version was as follows:

“Mortgage insurance premiums and other charges are sometimes paid at or before consummation or settlement on the borrower’s behalf by a noncreditor seller. In such cases, the creditor should treat the payment made by the seller as seller’s points and exclude it from the finance charge. A creditor who gives disclosures before the payment has been made should base them on the best information reasonably available, as called for by the estimate provisions of the regulation.” (Ibid.)

In 1997, this Comment was finally amended into its current form, to address “the treatment of finance charges paid by a noncreditor seller on a consumer’s behalf before loan closing; it clarifies that disclosures should reflect the payment if the consumer is not legally bound to the creditor for the amount paid.” (62 FR 10193 1997]). This Comment now states the following:

Neither the FRB nor the CFPB have provided any formal guidance regarding lender- or other-paid fees qua lender- or other-paid fees. The current guidance on seller-paid fees, as the history to 12 C.F.R. § 1026.4(c)(5) illustrates, came about, in large part, because loans involving government agencies customarily involved seller-paid items (and if such items were considered finance charges, the annual percentage rate on these loans could be higher than for conventional loans). Lender- and Other- paid charges have not had equivalent issues.

One area where lender-paid fees are addressed is regarding mortgage broker compensation:

Outside of this, there is scant guidance. Thus, in making a determination, lender- and other-paid charges must go through the same case-by-case analysis to determine whether the criteria previously outlined applies to them or not – with a special emphasis on whether the charge is “payable” by the consumer and, if so, whether the consumer indirectly pays the charge or not.

Subscribe to news, compliance and solution updates from Docutech